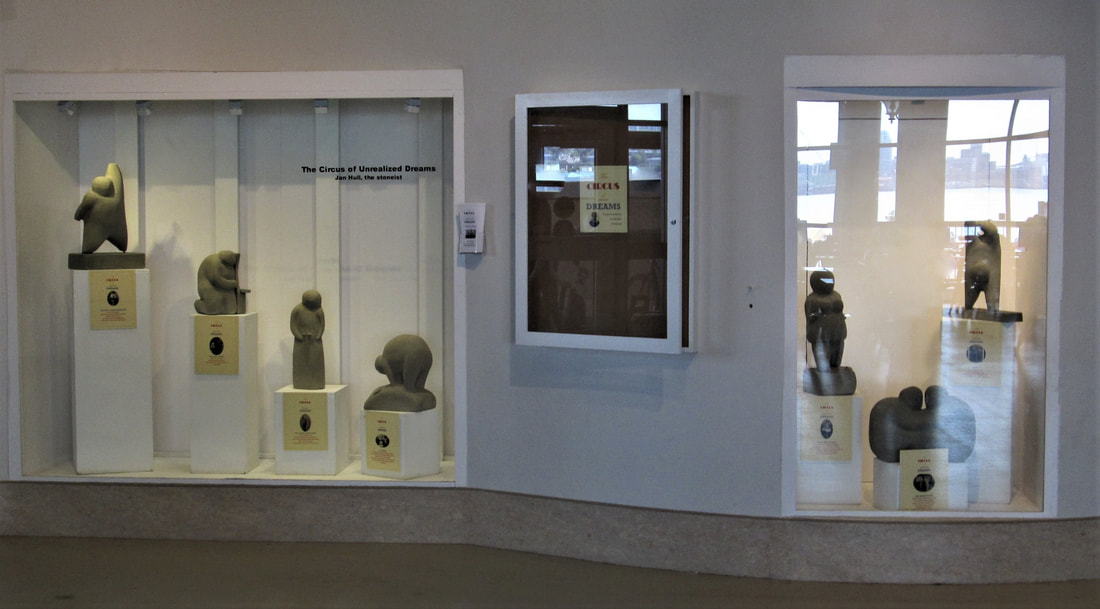 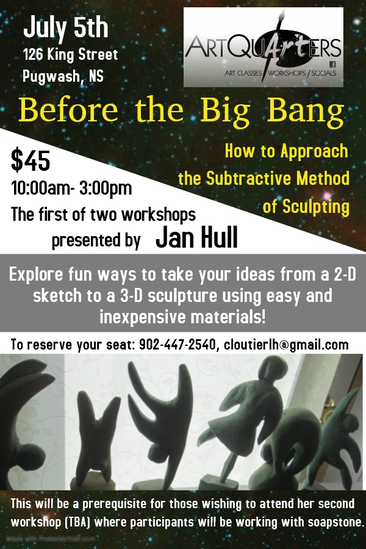 THREE CHURCHES FOUNDATION, 101 Edgewater Street, Mahone Bay, NS B0J 2E0
NEWS RELEASE TO:  ALL MEDIA
FROM: Three Churches Foundation Chair, Lee Simpson--902-292-2305, simpsonlj@hotmail.com
FOR RELEASE: ASAP
SUBJECT: LOVE COMES TO MAHONE BAY
Mahone Bay will soon be wearing its heart on its famed waterfront.
On June 14 at 4pm., the town’s Three Churches Foundation will unveil a stone sculpture, called “Heart Loves Mahone Bay,” in a green space opposite Trinity United on Edgewater Street.
The sculpture was carved in sandstone by Jan Hull of Newburne. Constructed in two parts, the space between permits photographers to capture sun, moon and aquatic reflections. The accompanying plaque quotes the late Leonard Cohen, “There’s a crack in everything, that’s how the light gets in.”
The sculpture was generously donated to the Three Churches Foundation by Margaret and Jerry Trites of Mahone Bay. In addition to its beauty, the piece will earn its keep for the Foundation, accompanied as it is by a Kindness Meter. Picture-takers are encouraged to top up the “parking meter” installed alongside.
The donors had seen the art previously at White Point Beach Resort and observed how visitors enjoyed taking pictures framed by the open heart and backed by the rolling surf. They felt it was perfect for Mahone Bay, the town being a premiere beauty spot and a major tourist attraction. Heart Loves Mahone Bay will be an enhancement of the streetscape. Moreover, the sculpture is consistent with the Foundation’s ‘Love Mahone Bay’ Events, initiatives partnered with Oak Island Resort where couples come to the South Shore to initiate or renew marriage vows.
About the donation, Reverend Lee Simpson, Chair of the Board of the Three Churches Foundation, said, “It is with great pride that we host this charming piece of Nova Scotia rock, carved into new meaning by Jan Hull, local miracle-worker in stone: it warms my heart that it will earn its keep by adding to Three Churches Foundation coffers while making visitors smile.”
The public is welcome to attend the unveiling at 4 pm on Friday, June 14. 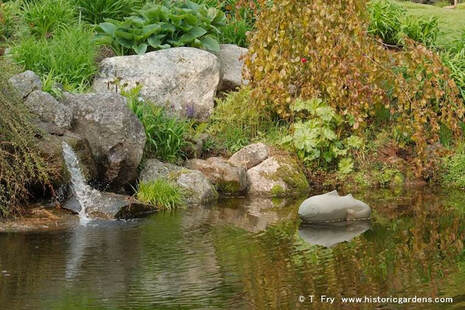 Fish is happy to swim again in Historic Gardens in Annapolis Royal, NS, for 2019.
​

2018: Another exciting year of creating and showing sculptures!

I became the interim President
​of the Lunenburg Art Gallery Society Board in July 2018.
Can't be any harder than carving stone, can it?
Lots of work ahead to make the Gallery ​a stable and valuable resource
for member artists and the art-appreciating community. 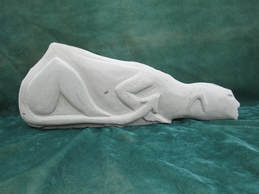 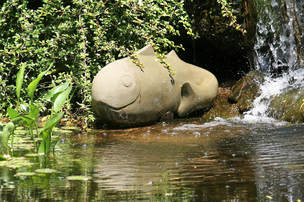 ​In 2017, FISH #1
was happily swimming in a pond
in Historic Gardens in Annapolis Royal.

OPEN STUDIO
September 2016, my studio was open to the public as part of the 3rd Annual Rural Arts & Life Tour.  New works were on display, including the entertaining "Humming Stone". 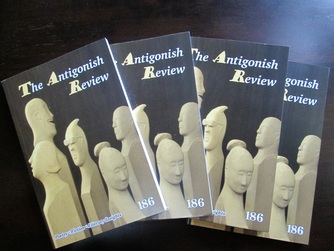 Here's a wonderful convergence of my two avocations, carving and writing. The Antigonish Review, a literary magazine, published my poem "Sentinels" in summer 2016, and featured a photograph of my Sentinels sculptures on the cover!
Cover photography by Betty Meredith, photosbybetty on Facebook.
​You can purchase issue 186 of TAR at Chapters or click here.

HISTORIC GARDENS, ANNAPOLIS ROYAL, NS 2016
Again, my sandstone sculptures were in these gorgeous gardens for the season - three "air works": Air Man, Air Woman, and Two Faces. Sculpture couldn't be in more lovely surroundings  - unless it's in your own garden...

NS Designer Crafts Council "Craft Year 2015"
Juried show at the Mary E. Black Gallery, Halifax,
​September 25-November 8, 2015
I was proud to have two soapstone sculptures included in this beautiful show, my first juried exhibition. What a great conclusion to a fabulous year!
RURAL ARTS & LIFE TOUR
This is a one-day annual event on the 2nd Saturday after Labour Day, through seven communities beginning at Highway 103 Exit 11 (Blockhouse) and heading inland. It runs through Newburne where I live and make my sculptures, so I participate by having an Open Studio that day. New works are on display. I'll demonstrate stone carving throughout the day.  For info on other exhibitors on the Tour, see website here or visit the Rural Arts & Life Tour on Facebook.
FESTIVAL OF SOIL, SOUL AND SOCIETY
The Fraser Cultural Centre in Tatamagouche, NS presented "Expressions of Soil, Soul and Society" in August 2015. I exhibited four sculptures - three sandstone and one soapstone. The sandstone is quarried in Wallace, just 15 minutes from Tatamagouche, so I had the "soil" part covered. I gave two demonstrations of sandstone carving which were well-attended and fun!
CHESTER ART FESTIVAL
In August I demonstrated soapstone carving at Art in Action, part of the Chester Art Festival in Chester NS.
SCULPTURE IN THE GARDENS!
Five of my series of sandstone Sentinels were installed in the beautiful Historic Gardens in Annapolis Royal, Nova Scotia, for the summer of 2015. This was a great honour, especially this year, as the Gardens received the 2015 Garden Tourism Award as Canadian Garden of the Year! 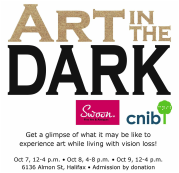 What a wonderful experience "Art in the Dark" was for me and my Sentinels sculptures in October 2014! Based on comments from visitors to the show and attendees at the two workshops, it was meaningful for them too. I met lots of great people during the three-day show and workshops. See a short video here.
Read more about CNIB and Swoon here.
The event culminated in workshops by me and Brandt Eisnor of Swoon, for people with vision loss and their guides. The ensuing discussions proved that being blind doesn't dull one's desire or ability to experience visual art, it just requires a little ingenuity to access it.